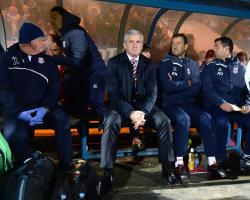 Chelsea, Manchester City and Tottenham all exited the competition over the weekend while Manchester United were held to a draw at Sky Bet League Two Cambridge.

But Stoke did not fall into the same trap as their rivals as goals from Bojan Krkic, Stephen Ireland, Jon Walters and Victor Moses were enough to see off League One Rochdale on Monday night.

It would have been foolish not to," the Stoke manager said.

"I needed to make sure there was a real focus to us as a group.

"There was a reason why the television cameras were here - people were hoping for an upset, but we didn't want to be a part of that

We didn't want it to happen."

Ireland put Stoke 2-0 up just after the break, then Moses scored a stunning curler for the Potters' third and Walters rounded the win off from close range after Rhys Bennett's consolation goal for the hosts.

But the best goal of the night was Stoke's first, which was scored by their star player Bojan.

The 24-year-old, who has now scored five goals since his move from Barcelona, hammered a left-foot-volley past Josh Lillis from 22 yards after Dale had looped the ball clear from their own box.

Soon after the in-form forward hobbled off with a knee injury.

Hughes hopes the Spaniard, who has been a revelation for the Potters this term, is not out for a long time.

"There is a concern there for us," Hughes said.

"We don't know how bad it is

He has gone back home and we will check him in the morning.

"He is due for a scan so hopefully he will be okay.

"Hopefully if the scan is clear he will be okay and it is just a short-term thing but at the moment it's a concern for us."

Hughes thoroughly enjoyed watching Bojan's effort fly in from just outside the box.

"It was an outstanding goal," the Welshman said.

"He showed his qualities once again and it will be disappointing if we lose him for any length of time, but if you do others have to step up to the mark.

"Stephen Ireland came in and showed a lot of quality tonight

He always looked likely to score and he did tonight

"If one door closes for one player, another opens."

Hughes is relishing a trip to his former club Blackburn in the fifth round.

"It will be good to go back," said Hughes, who managed the Lancashire club for two years.

"I have good memories of my time there and there are lots of people I know still there.

"We will have a great following and it will be a real cup tie to look forward to."

Rochdale manager Keith Hill could have been celebrating a victory had his team taken their chances in the first half.

Hill said: "We tried to attack with intent and press the opposition but they are an excellent side.

Fair play to Stoke, they were worthy winners in the end.

"The Bojan goal was a great piece of skill but it didn't frighten us.

"The lads have done the club credit

We were undone by four Premier League quality goals."