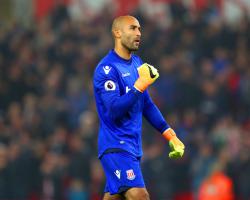 The 33-year-old goalkeeper made a surprise deadline-day loan switch to the Potters, having fallen down the pecking order at Pride Park.

Grant was signed as cover for injured Stoke number one Jack Butland and swiftly usurped Shay Given between the sticks, flourishing since making his first ever Premier League appearance on September 24.

The goalkeeper was named man-of-the-match for his display in 10-man Stoke's hard-fought 0-0 draw with Southampton on Wednesday, leading to post-match praise from Hughes.

However, the Stoke boss warned that Derby's demands could prevent Grant extending his stay, with his loan expiring on January 3.

"He has done great," Hughes said

"We'd like Lee to stay and I think that Lee would love to be a part of the club.

"At the moment, obviously, Derby have the upper hand in terms of negotiation and maybe they just need to come to a little bit more of a sensible conclusion.

"At the moment it is a little bit difficult, so we hope it is going to be resolved

It needs to be for all three parties, really: Derby, ourselves and Lee, more importantly."

Hughes remains unsure when England international Butland will return - "it's wrong to place a timescale on it," he said - but was clear that he wants a strong group of goalkeepers at the bet365 Stadium.

"If you look back at the goalkeeping group, even before my time, it has always been really strong here.

"We want that group to get back to those levels as well, so the likes of Jack, Shay, Lee and Jakob (Haugaard), who has been played in the first team.

"It gets that strength in the goalkeeping group back to the level it was maybe a couple of years back."

Grant's best save came from a second-half strike from Ryan Bertrand - a player who was looking at the positives, despite toothless Southampton's inability to capitalise on Marko Arnautovic's early sending off.

Saints make the short trip to Bournemouth on Sunday and the left-back wants to extend their unbeaten run to a third Premier League match.

"We had a difficult time (last season when we lost 2-0) and there's a bit of a rivalry," Bertrand said.

"But we'll dust ourselves down from tonight and take full confidence from the last two games to take into that one," he explained.

"We have to respect them but we'll just go about our business as normal and go there looking to upset them for the three points."