Crouch- Wrexham gave us a scare 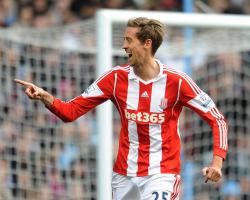 The Barclays Premier League hosts were staring a humiliating third-round FA Cup exit in the face in the 73rd minute when Mark Carrington's header gave the Welsh side a 1-0 lead they were certainly good value for.

Stoke had struggled to find any rhythm prior to that and had seen their crossbar struck by Wes York.

However, boosted by substitutes Jonathan Walters, Crouch and Stephen Ireland, the Potters subsequently managed to pull off a late comeback to secure a place in round four with a 3-1 win.

Crouch's parried shot was followed up by Marko Arnautovic to draw things level in the 80th minute and the tall frontman then set up a strike in the 88th from Ireland, who added another in stoppage time.

Crouch said: "They gave us a real scare and it shows if you're not 100 per cent at it you can get in trouble

We're thankful that we've come through it in the end.

"I don't think we created enough in front of goal and the more it stays at 0-0 the more problems you will have towards the end.

"Credit to us after they scored, we managed to come back and win the game

But the only real plus out of it was that we're in the hat for the next round."

The 33-year-old, who won the FA Cup in 2006 with Liverpool, added: "If we'd have lost then we would have been bitterly disappointed

With all due respect to Wrexham, they shouldn't be beating us at home.

"Thankfully we've come up with three goals in the end and we can forget about this as quickly as possible and move on to the next round.

"If you get to the final of this competition nobody is worried about who you beat in the third round or how you played."

Crouch also made it clear he did not want to discuss his current contract situation with Stoke.

His deal runs out this summer and talks over a new one have reportedly stalled, while West Brom are being linked with him.

When asked for an update on that, Crouch said: "I don't want to talk about it - I've not heard anything."

Wrexham midfielder Carrington rated his goal, notched right in front of the club's considerable army of fans who had made the journey to Stoke, as his "best moment in football".

And he added: "To score against a Premier League side at a ground like the Britannia, and in front of 4,000 of our supporters, it's the stuff dreams are made of.

"I thought we played really well and, although we're gutted to lose it, we can hold our heads high.

"The travelling support was first-class and their roar was louder than Stoke's for the entire match."