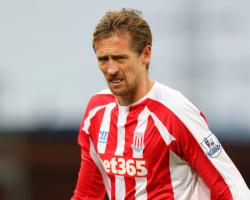 Former England striker Crouch had been linked with a move away from the club with his existing deal due to expire in June, but is now committed to the club until 2017.

Crouch joined Stoke from Tottenham in 2011, while Whelan has been with the Potters since 2008, helping them win promotion to the Premier League later that year.

Keeping Crouch became even more important to Stoke after the news earlier this week that Bojan Krkic has been ruled out for the rest of the season with a knee injury.

Manager Mark Hughes told the club's official website: "We've been talking to both players for a while and it's pleasing that both want to stay and be a part of what we are striving to achieve at the Club.

I'm delighted they are staying with us for at least another couple of years."

Stoke chief executive Tony Scholes added: "Players like Glenn and Peter are very much the backbone of our squad and we're delighted they have committed to spend at least another two years with the Club.

"They have both proved to be fantastic signings for Stoke City

The experience they bring to bear on the side, both on and off the pitch, cannot be under-estimated and they still have so much to offer."