Crouch backing Tottenham for the title 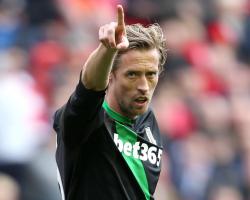 The Potters host Spurs, with the north Londoners needing a win to keep their hopes of reeling in league leaders Leicester alive.

Crouch, at Tottenham for two seasons before joining Stoke in 2011, admits he hopes the London outfit can catch the Foxes, who are eight points clear having played a game more, and finish the campaign as champions.

But the 35-year-old has also stressed that his priority is his current side, who are looking to bounce back from their 4-1 defeat at another of his former clubs Liverpool last weekend - a match in which he made his first start since February 2.

Crouch told pottersmag: "I would love to see Tottenham win the Premier League.

"It's a great club that has probably underachieved in recent seasons and I think for them go on and win it would be incredible.

"Obviously it would be incredible if Leicester were to do it too for so many reasons, but for me, having spent a good period of my career at White Hart Lane, I would like Spurs to nick it.

"First and foremost though we have to try and get the three points to get ourselves back on track following our defeat at Liverpool.

"The most important thing for us is not to worry about anybody else's season and concentrate on cementing ourselves in the top 10 and finishing as high as we can in the table.

"If in turn that compromises Tottenham's challenge for the title then so be it - my main priority right now is to help Stoke end the season well."