Coates hits out at referees 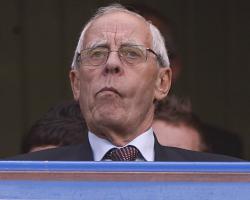 Coates was left angered by recent decisions in matches against Newcastle and Spurs, the former resulting in an official complaint made against Martin Atkinson.

Coates is unlikely to follow suit on this occasion in the wake of Anthony Taylor's performance during Sunday's 5-3 defeat to Liverpool at the Britannia Stadium.

But he has made his feelings plain after seeing Raheem Sterling appear to dive to win a penalty that gave Liverpool a 3-2 lead after Stoke had clawed their way back into the game from a 2-0 deficit.

"The game changes when the referee gives a penalty for the merest of touches. The player dived," said Coates, speaking to The Sentinel.

"There was also a handball by Sterling before the penalty, one the linesman didn't see, and that is a game changer.

"We are again victims of poor refereeing and I am sick of it. We had it against Newcastle and Tottenham, and now Liverpool.

"You get fed up with it because these are big decisions that affect the games you play in, so you are bound to get very upset by it.

"It is well known that the big clubs, especially at home, but often away too, get the big shouts.

"I am not questioning any referee's integrity, it's human nature. It's always been like that and it never changes."

Coates believes previous comments from Liverpool boss Brendan Rodgers about decisions that went against his own team in games with Chelsea and Manchester City may have played a part in Taylor's thinking.

"If you remember, Brendan Rodgers was rather annoyed not to get a penalty recently," added Coates.

"I am not accusing referees of cheating, just acting subconsciously under various different pressures."