Butland set for further scan as his comeback is delayed 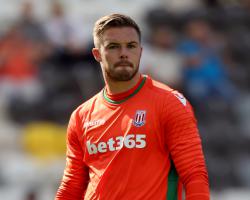 The 23-year-old has not played since last March when he fractured his ankle on Three Lions duty in Germany, with a setback suffered over the summer requiring more surgery.

Butland has been nearing a return and was named in the starting line-up for the Under-23s' clash against their Reading counterparts on Friday, only to withdraw from the fixture prior to kick-off.

Speaking prior to the senior team's game with Burnley at the bet365 Stadium, Stoke assistant Mark Bowen has revealed Butland elected to pull out having felt a problem in the warm-up and will be tested on Saturday to determine if he has aggravated the ankle issue again.

"All I'll say is, without wanting to panic anyone, he went down to Reading and felt something in the warm-up," Bowen said to BBC Radio Stoke in his pre-match interview.

"We won't know the extent until he has an MRI scan, but he was intelligent enough to calm his enthusiasm

He's played on the safe side

We won't know the damage until he has the scan

Maybe it will be another injection but we need the experts to look at the scan."