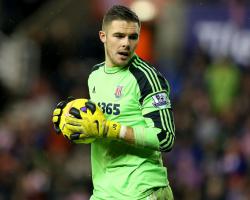 The Stoke player was an unused member of the squad at Euro 2012 and was the youngest goalkeeper ever to make a senior appearance for England when he played against Italy in August 2012 aged 19.

There is plenty of competition for the three spaces available in Roy Hodgson's line-up for Brazil, with the likes of Fraser Forster, John Ruddy and Ben Foster in pole position to join number one Joe Hart.

But Butland has an unexpected chance to impress in the Barclays Premier League following injuries to Asmir Begovic and Thomas Sorensen and he is determined to stake his claim.

He said of making the World Cup: "That's always been my focus. Having tasted the England set-up before, I know what it's like, it's the greatest feeling ever to play for your country.

"I'm focused on getting back into that squad, and if I was to make the World Cup it'd be a target achieved."

Butland took over at half-time of the draw with Everton after Sorensen picked up an Achilles injury and made his first start for Stoke in Saturday's 2-1 victory over Leicester in the FA Cup third round.

Butland did his cause no harm at all, pulling off three good saves, and he seems certain to keep his place when Liverpool visit the Britannia Stadium at the weekend.

He said: "I need to be playing in the Premier League and with a good quality of performance if I want to go to the World Cup. It's as simple as that.

"There's goalkeepers around me like Hart, Foster, Ruddy, Forster, they're playing at the top level regularly and if I can match that level of performance and perform even better then I've got a chance, if not it's going to be difficult.

"But that's certainly my target for this season. I'm confident I can get back there."

The summer of 2012 was probably the highlight of Butland's career so far, with the then Birmingham player also in goal for Team GB at the Olympics, where the hosts beat Liverpool striker Luis Suarez's Uruguay.

He joined Stoke a year ago and was immediately loaned back to Birmingham, while he spent the first half of this season on loan at Barnsley.

With Begovic one of the leading goalkeepers in the Premier League, Butland's opportunities at the Britannia Stadium appeared limited, but the Bosnian broke a finger just before Christmas and will be missing for several more weeks.

Butland insisted he is content to bide his time, saying: "I've been very happy, I've been patient. I've known there's no rush and the competition I've had is fierce.

"I've just been concentrating on working hard - and when the time comes it's about trying to take that opportunity.

"If my performances can help the team win then it can keep me in the side I suppose.

"I'm enjoying playing and enjoying coming back from the loan, where I thought I played consistently. If I could get a run of games I'd be chuffed."

That run of games is almost certain to end once Begovic is fit again, and Butland is open to another loan spell.

He said: "If I wasn't in the side and Asmir, when he's fit, comes back into the line-up, then I've got to be looking at playing games still. If that means going out on loan, that's something I'd have to look at."

Stoke manager Mark Hughes praised Butland's performance against Leicester and believes the loan spell at Barnsley has benefited him.

Hughes said: "We are pleased with the situation that we have in terms of our goalkeepers.

"Jack, we feel, is the future and will be here because that was the intention but we have got an outstanding goalkeeper in Asmir Begovic and Thomas Sorensen is a very experienced senior keeper.

"You can see the difference in Jack, he's always been a self-assured and self-confident player but you can tell by his performance that going out on loan has helped him and he's in a better place.

"He has got an opportunity because of the injuries but he has to come in and do his best because he wants to make a real impression for a lot of reasons.

"First and foremost he wants to do well for Stoke City and if he keeps performing like he did (on Saturday) then everybody will be happy."