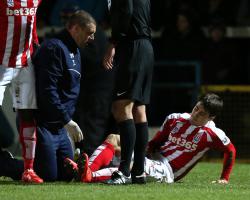 Scans have revealed he suffered a ruptured cruciate ligament in his left knee and will have to undergo surgery.

Manager Mark Hughes told the club's official site: "It's bitterly disappointing for the club but even more so for Bojan himself as he was making such a big impact on the Premier League and clearly enjoying his football

We wish him a speedy recovery."

Bojan moved to Stoke from Barcelona in the summer and has scored five goals in 18 games this season.

Bojan had hit form for Stoke, netting all five of those goals in his last 12 games, scoring in his last two outings.

He bagged the winner in the 1-0 win at Leicester this month which left Stoke 10th in the Barclays Premier League.