Bojan conjures up moment of magic 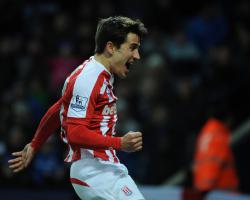 The Spaniard's fourth goal of the season just after the hour proved decisive, ending the Foxes' four-match unbeaten run and so ensuring Nigel Pearson's side remain at the foot of the Barclays Premier League.

For Mark Hughes' Potters, after being thumped 3-0 at Arsenal a week ago, the 1-0 victory was the perfect tonic, particularly after losing skipper Ryan Shawcross to injury ahead of the game.

With both sides showing four changes apiece, the first half had little going for it bar a handful of half chances as neither the Foxes' Ben Hamer nor Stoke's Asmir Begovic were ever truly tested.

There was understandably industry and effort from two teams renowned for hard work and graft, but then this was never going to be a hand-warming classic on a crisp afternoon.

Indeed, a near sell-out crowd had to wait 11 minutes for the opening effort following a tedious first 10 minutes.

Even then it was an inadvertent one as an attempted clearance from Marc Muniesa to an Anthony Knockaert corner looped just wide of Begovic's left-hand post.

Four minutes later and Stoke had what proved to be their only chance on target in the first half with a 25-yard free kick from Marko Arnautovic comfortably scooped up by Hamer after Bojan had been fouled by Marcin Wasilewski.

That challenge clearly counted against Wasilewski because in the 19th minute another poor tackle on Jonathan Walters resulted in referee Andre Marriner dishing out what proved to be his only yellow card of the game.

Just before the half-hour mark some life was finally injected into the proceedings with the Foxes creating two chances inside a minute.

Jeff Schlupp, pulled from African Nations Cup duty with Ghana earlier this month due to a knee injury but back in the City side on the day the competition began, was the architect of the first.

A thorn in the side of right-back Phil Bardsley virtually all game long prior to his exit in the 71st minute, Schlupp played an inviting low ball into the path of Knockaert, but his 12-yard side-foot shot was picked off by Begovic.

Moments later Jamie Vardy set up David Nugent, again for a first-time effort, but from an angle the striker's curler drifted beyond the right-hand post.

Stoke's only other opportunity of the half came when centre-back Philipp Wollscheid rose between two markers on to a corner from fit-again Victor Moses, back after eight weeks out with a thigh injury, only to watch it drop a yard wide.

Four minutes before the break Schlupp was again the provider from the left, leading to a clever turn and left-foot backheel from Vardy from eight yards out, but with not enough on it to beat Begovic.

After the interval there was only one side in the game, with Hughes' side far sharper and hungrier than their opponents.

After just 75 seconds of the second period Stoke should have taken the lead, with Arnautovic running in behind Paul Konchesky and on to an incisive ball from Moses, only to rifle his shot into the side-netting.

On the hour an attempted clearing header from captain Wes Morgan only fell as far as Steven N'Zonzi who drilled in a 20-yard right-foot volley that was brilliantly beaten away by Hamer.

But Stoke were not to be denied and three minutes later they made the breakthrough, sparked by Walters with a run and pass to tee up Bojan.

With his back to goal there was still work to do, but the Spaniard took one touch with his right foot, turned and with his left drilled a 17-yarder past Hamer.

It came at a time when Pearson was poised to introduce new signing, striker Andrej Kramaric, who could only stand and watch Bojan net what proved to be the winner.

Pearson also brought on Leonardo Ulloa in the 71st minute, but with little service to his side's front two, it ultimately came as no surprise to see his side's recent revival come to an end.