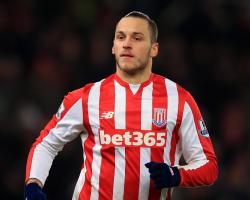 Arnautovic, a star performer for the Potters this season, signed a four-year deal with the club when he joined them in the summer of 2013 and it is understood the clause becomes active in the final 12 months of the agreement.

Talks over a new contract have been held between Stoke and the 26-year-old, but reports last month suggested Arnautovic had rejected an offer from the Staffordshire outfit and was holding out for one that would make him their highest-paid player.

At that time in early January, amid talk of Paris St Germain being interested in the Austria international, Stoke boss Mark Hughes said: "As with all negotiations, usually people representing players go in high, we go in low and somewhere in the future we come to a middle ground and it gets done.

"That is what is happening in terms of Marko's situation.

"We are very hopeful Marko will be a big part of what we are doing going forward, and I think that is what he would like."

A week later Hughes scoffed at suggestions Arnautovic was demanding Â£100,000 a week, saying: ''Figures being bandied about are just supposition by people taking a stab in the dark who really have no real idea.

''Negotiations are ongoing and it is not affecting him adversely, so there is no issue with it.''

Stoke paid a reported £2million fee for Arnautovic when they recruited him from Werder Bremen.

He is the Barclays Premier League side's top scorer this term with eight goals in all competitions.