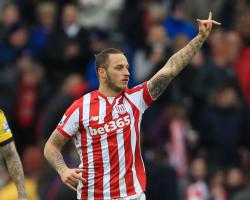 Villa boss Remi Garde publicly questioned the commitment of some of his players in light of the performance against Liverpool last time out, with the 6-0 defeat the club's worst home loss in 81 years

Perhaps stung by those words Garde's team, with just one change - Alan Hutton in for Micah Richards - looked much better especially during the first half at the Britannia Stadium

However their soft underbelly returned at the start of the second half and it cost them as Arnautovic hit two goals, the first from the penalty spot, putting Stoke comfortably in front with 56 minutes on the clock

It would have been easy for Villa to crumble, and if a Philipp Wollscheid header just after the hour had gone in they might have, but they dug in and showed some rare fight and pulled a goal back through Leandro Bacuna with 11 minutes remaining

An equaliser never looked likely though and t he defeat, Villa's 10th away from home in the league this season, leaves them eight points adrift of safety at the bottom of the table

Shortly afterwards Bunn was relieved to see Xherdan Shaqiri's curling, left-foot free-kick from the right side of the penalty area, about 30 yards from goal, drop a foot wide of the near post

The 13th minute would have probably been unlucky for Villa had Joleon Lescott not cut out Arnautovic's dangerous, low cross, with Jonathan Walters lurking with intent behind him

When Afellay did get in behind as the half-hour mark approached, Okore stopped him in his tracks with a crucial, well-timed tackle just as the Dutch midfielder was about to shoot

Arnautovic blasted the resulting penalty straight down the centre

"Apologies for that tweet, it was sent from our pocket ;-)" - Stoke's official Twitter account get in on the fun, moments after tweeting the lyrics to a song Villa fans were singing at Joleon Lescott.

A handful all afternoon for Villa's defenders

His performance deserved a goal - it got two!

MOMENT OF THE MATCH

Bunn's save after seven minutes

Villa might have crumbled had they fallen behind so early.

VIEW FROM THE BENCH

Perhaps stung by those words they were much improved and, to a degree, looked more organised

Stoke boss Mark Hughes will be pleased to see his side back among the goals and winning again as they target a European place.

MOAN OF THE MATCH

Sinclair went down late on looking for a penalty