Stoke need to start winning but Hughes has chairmans support 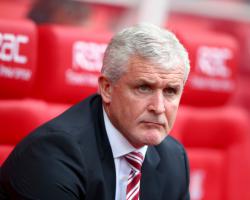 The Staffordshire outfit are bottom of the Premier League after taking just one point from the opening five fixtures of their campaign.

They have suffered four league losses in a row, with three of those seeing them concede four goals.

Stoke host Hull in the EFL Cup on Wednesday before Saturday's league visit of West Brom, managed by their former boss Tony Pulis.

And Coates, quoted by The Sentinel on Tuesday, said: "I haven't had a meeting with Mark

There's a match on Wednesday.

"He's our manager and he's got our support

"He's been around the block

We've finished ninth three times and that tells you he's got experience.

"He's been a manager for some time and he's got two experienced coaches (Mark Bowen and Eddie Niedzwiecki) alongside him."

Coates added: "We are disappointed to be where we are.

"We've had results we haven't liked and it has been a poor start to the season.

"We need to start winning matches, the sooner the better, and as soon as we do that it changes everything.

"We've got experienced players and they've got to do better.

"One result will give us confidence and then we can be on our way again."