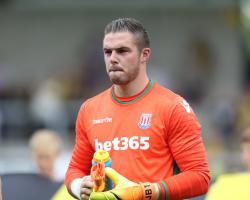 Goalkeeper Butland missed the 1-1 draw at Middlesbrough on Saturday having sustained an injury in training the day before to the same ankle he broke while on England duty in March.

Stoke manager Mark Hughes stressed after the game on Teesside it was not a recurrence of the fracture that ended the 23-year-old's 2015-16 campaign, describing it as a "bang" that "should settle down in the next two or three weeks, hopefully."

And, giving an update on Tuesday to BBC Radio Stoke ahead of Saturday's match at the Britannia Stadium, Bowen said: "Jack hasn't trained today but he has been out there, in the sunshine, with a big smile on his face which was good for us all to see.

"He tells me that he is feeling fine, and depending on how the rest of the week goes there may even be a chance of him being ready for the game on Saturday - although I say that with caution.

"Obviously, we have three or four days before then and anything can happen, but if he keeps on improving the way that he is, and he rests it up well over the next day, then who knows."

He added: "I think the diagnosis that he received was that a little bit of scar tissue had come away which was causing him the real pain, but now that has settled, he is feeling a lot better."