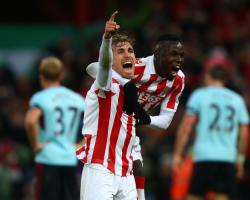 Jonathan Walters scored his first goal since March with a looping volley before centre-back Marc Muniesa, who had never found the net in the Premier League, broke upfield to add a second which leaves the Potters ninth in the table.

It inflicted a fifth defeat in six on the road for the Clarets, who remain winless on their travels despite four triumphs at Turf Moor for last year's second-tier champions.

The away-day woes Burnley had experienced had prompted Sean Dyche to alter both his formation and line-up, dropping Steven Defour, Sam Vokes and Matthew Lowton and revisiting the 4-4-2 formation.

Stoke, meanwhile, were unchanged as Mark Hughes persisted with the en vogue 3-4-3 that had earned them three points at Watford six days earlier.

It seemed an alien system to the Potters' players in the early exchanges, though, as Scott Arfield saw a free-kick deflected wide and the recalled Andre Gray fired off target.

The hosts eventually woke up and nearly took a 10th-minute lead from a Xherdan Shaqiri corner that an unmarked Bruno Martins-Indi nodded against the base of the far post.

It was from another dead-ball situation that Stoke did take the lead 10 minutes later as Walters turned home his 40th Premier League goal for the club.

Mame Diouf, the converted right wing-back, played a one-two with Shaqiri from a throw and his cross bypassed the falling Ben Mee, with Walters' instinctive flick towards goal looping into the net off the far post.

Walters had a part to play in the second goal 10 minutes before the break, even if his role was an inadvertent one.

With Stoke's scorer down injured, his Republic of Ireland team-mate Stephen Ward passed out of play to allow him to receive treatment, much to Dyche's despair, and the Burnley boss was even more exasperated when Charlie Adam only gave Burnley the ball back via a throw deep in their own half

Muniesa started the move himself in his own half by skipping past two challenges and converted it with a fine finish from Marko Arnautovic's cross, which came after the Austrian had beaten Jon Flanagan all too easily.

As well-worked as it was from a Stoke perspective, it was a meek goal for the Clarets to concede, particularly as it stemmed from Ward's sporting, but perhaps naive, act.

With Lee Grant's only save coming from Jeff Hendrick's weak effort prior to the break, Dyche got the second-half response he was looking for both in attitude and application after the resumption.

There was more bite about Burnley and their players fumed at referee Mark Clattenburg's decision to only award a yellow card and a free-kick after last-man Muniesa's tugging match with Gray carried on into the box.

Hughes seemed to sense a Burnley fightback too as he introduced Joe Allen for Shaqiri on the hour mark after Mee had driven into Grant's arms from a corner.

Allen tested Paul Robinson on a couple of occasions, once from a Arnautovic pull back and another from a lay-off from fellow replacement Peter Crouch, and the Welshman's presence at least seemed to help kill off any hopes of a Clarets comeback, with Grant saving brilliantly from Gray in their only real clear-cut opening.