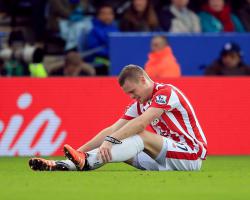 Shawcross came off in the first half of Saturday's 3-0 Barclays Premier League loss at Leicester.

And giving an update on the central defender on Monday, Hughes said: "Thankfully it is not a recurrence of the back injury which required surgery (over the summer) so that is a positive.

"Unfortunately, the negative is that he has soft muscle damage and at the moment it is looking like it will probably be three to four weeks I would think."

Since Shawcross made his return in October from a back operation, Stoke have lost only five times in all competitions.

Hughes added: "It is a blow to us because since Ryan came back into the team, we've been on a good run.

"It was certainly detrimental to our performance on Saturday."

Hughes was speaking at his press conference to preview Tuesday's Capital One Cup semi-final second leg at Liverpool, which the Potters head in to trailing 1-0 from the first leg.

The Welshman expects forward Marko Arnautovic, who has been carrying a hamstring problem for a while and sat out Saturday's match, to be available for selection.

Hughes said scans had shown there was "just a little bit of tightness" rather than any major damage to Arnautovic's hamstring and that Stoke would make sure the Austria international, having trained on Monday, was "primed and ready to go" for Tuesday night.

Midfielder Geoff Cameron (ankle) remains sidelined but may be able to return in Saturday's FA Cup game at Crystal Palace.