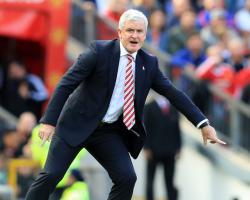 The Potters halted a run of four straight Premier League defeats by drawing their last two games, only being held 1-1 at home by West Brom due to a stoppage-time equaliser from the visitors and then securing the same scoreline at Manchester United.

While encouraged by those displays, Hughes has no doubt 19th-placed Stoke need to chalk up their first league victory of the season this weekend when they host a rock-bottom Black Cats outfit who are the only other winless side in the division.

"We have been really encouraged with our performances the last couple of games and I think everyone can see we are getting back to our levels," the Welshman said on Friday.

"We had a huge result at Old Trafford with a good, confident performance and we are back on track now in our view.

I am more than confident we have the capability in the team to do that.

"It will be difficult, because Sunderland are in a situation they don't want to be in

But we're the home side, and I think the onus is on us to make sure we are positive.

We were very unlucky not to get a first win on the board then, conceding late on.

"I think the overall feeling after that was we are going in the right direction, that it's only a matter of time.

"It's okay saying that, but you have to get on with it and get those maximum points on the board

And we have a good opportunity at the weekend."

Having played the likes of United, Tottenham and Manchester City in their first seven league games this term, Stoke now have a run of seven during which they will face not just current basement boys Sunderland but also the likes of Swansea and West Ham, 17th and 18th at present respectively.

And Hughes added: "The key is to build on the confidence we have shown and make sure we get maximum points - then I think we will very quickly build our season.

"With the period we have now, leading towards Christmas, I think we are encouraged that we have a good opportunity to get a lot of points on the board, and that is our intention."

Stoke midfielder Joe Allen will be assessed ahead of Saturday's match.

Allen is a doubt for the contest having missed Wales' 1-1 draw with Georgia last weekend due to a hamstring problem, with Hughes on Thursday having suggested the 26-year-old "probably did a little bit too much" work with the national team, which "compromised" him

Full-back Glen Johnson will definitely not feature having been ruled out for at least three to four weeks because of a thigh injury he suffered in training this week.