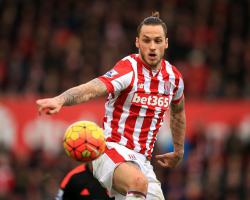 Reports have suggested Arnautovic, who is being linked with Paris St Germain, has rejected a new deal offered by the Potters and is holding out for one that would make him their highest-paid player.

The 26-year-old Austria forward, a star performer for the Staffordshire outfit this season, is currently on a contract that runs out in the summer of 2017.

When asked about Arnautovic's situation on Thursday, Hughes said: "It is where it was just before Christmas I think.

"As with all negotiations, usually people representing players go in high, we go in low and somewhere in the future we come to a middle ground and it gets done.

"That is what is happening in terms of Marko's situation.

"We are having negotiations

Sometimes they take longer than others

"But we are very hopeful Marko will be a big part of what we are doing going forward, and I think that is what he would like."

Hughes also emphasised his desire to keep hold of Peter Crouch after Leeds boss Steve Evans said he had been told the striker was unavailable.

Asked if there had been enquiries about Crouch, Hughes said: "That would be true to say.

"Some of them flag it up and actually name names, and I don't think that is correct.

"But I haven't had any direct conversations with any manager in regard to Peter.

"He is one we want to keep

And he hasn't said anything of the kind (about wanting to join Leeds)."

Hughes has frequently said there is no urgent need for him to bring new signings in during the current transfer window, but he did hint on Thursday he could be interested in Porto's Giannelli Imbula.

When the French defensive midfielder's name was put to him, Hughes said: "There are lots of names being bandied about - that's one of them

"There isn't an urgency to go in the market, but if good players become available, we'll have an interest."

Hughes was speaking ahead of Saturday's FA Cup third-round trip to Sky Bet League One side Doncaster.

He fielded the same starting line-up for a fourth time in 10 days when Stoke lost 1-0 at home to Liverpool in Tuesday's Capital One Cup semi-final first leg.

And with a Barclays Premier League clash against Norwich to come on Wednesday, Hughes will shuffle his pack at the weekend.

But he added: "I think you'll find when the selection is made, almost everyone will be a full international.