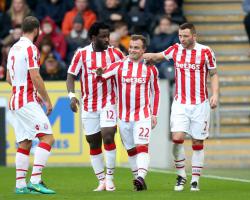 Shaqiri, a club-record ÃÂ£12million signing from Inter Milan in August 2015, curled home a superb left-footed effort midway through the first period and then bent a free-kick inside Hull goalkeeper David Marshall's left-hand post early in the second half.

"He'll definitely score more this season," said Hughes, whose side appear to have put another slow start to the season behind them.

"Clearly he's up and running now, he's got three as we speak, and will clearly beat last season's total (three) this time

"If he continues in the same vein and shows the same application, there's more goals to come from him."

"He's come back this season with real purpose and he's very positive in every aspect of his work.

"Maybe last season he was getting to grips with the Premier League to a certain extent, but he feels, and looks, totally accustomed to the league now and has had a real impact in the games that he's played for us."

"It's difficult at the moment for Mike, but he's a very experienced football man and it's a big opportunity for him," Hughes added

"I've known him for many years and he's very conscientious and works exceptionally hard and I think he's going to make big changes.

"It's not easy, but he knows the game and knows what he wants from his players and I expect him to turn things round very quickly."

Hull's impressive start to the season under Phelan seems a long time ago - they beat champions Leicester and Swansea in their first two matches - and they have lost both games since the manager was appointed on a permanent basis.

"First half really we weren't proactive in passing the ball well and off the ball and we came unstuck to an exceptional first goal from a quality player, who's capable of doing these things."

Phelan's side were humbled 6-1 at Bournemouth in their previous match and Phelan admitted his players were low on confidence.

"It was low, you could see certainly in the first half opportunities to pass to each other, control, make the right movements, it just wasn't happening for us

"So we have to take stock of that and look at those issues and look forward to the next game."

One positive for Phelan was the return of skipper Michael Dawson, who made his first appearance of the season

Dawson, fully recovered from a knee injury sustained in the summer, made one goal-saving tackle to deny Wilfried Bony in the first half

"Michael Dawson's the right character to have around," Phelan added

"He's been there, seen it and done it

So that was one pleasing aspect."