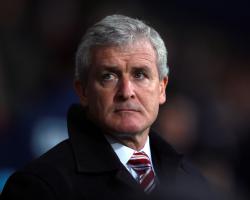 The Potters lost the League Cup clash with Liverpool via a penalty shoot-out they had forced by finishing 1-0 up on the night after 120 minutes of the second leg at Anfield, making it 1-1 on aggregate.

This weekend's contest is the third of four straight away games for Hughes' men.

And the Welshman, whose team lost a Barclays Premier League match at Leicester last Saturday and face another at Manchester United next Tuesday, said: "It is a tough period we are in, with away games with very little respite.

"But we want to get positive results on the board, and we want to progress in the FA Cup.

"The disappointment of not getting to a Wembley final is still with us, so to progress in another competition that leads to Wembley would be a great tonic."

Hughes won the FA Cup four times - as well as plenty of other trophies - as a player, but is still searching for his first piece of silverware as a manager.

And although he is set to ring the changes to his side this weekend, he has stressed the importance of the selection still being "strong".

"It's a great competition and we want to stay in it," Hughes said.

"There's only so many competitions we can win and the FA Cup now is the only one realistically - so why wouldn't you have a go? We are certainly of that mindset.

"It is a competition that was very good to me as a player and as a manager I'd love to have success in it."

Stoke's Premier League rivals Palace - currently 11th in the table, two places and two points worse off than the Potters - could give a debut to Emmanuel Adebayor on Saturday after he joined them this week on a deal to the end of the season.

Adebayor last played a competitive match in May, the striker having been a free agent since his release from his contract with Tottenham in September.

The 31-year-old former Arsenal, Manchester City and Real Madrid man has a reputation for being problematic for the managers he is under.

But Hughes, who signed Adebayor for City, has praised the Togolese player and backed him to shine for Palace.

"He is a great player," Hughes said.

"If you get him going and on fire, then he is a real handful.

"I had him at Man City

For whatever reason he seems to court a little bit of bad publicity about himself as a person and as a player, but I never really experienced it - I enjoyed working with him.

"I thought he was a good guy and played really well

He's a top player and a good acquisition for Palace."