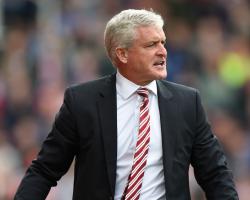 However, the Potters have expressed concerns about inconsistencies shown by match officials towards managers leaving the technical area.

Hughes was given his marching orders in the 34th minute at the Britannia Stadium for appearing to direct verbal abuse towards fourth official Jon Moss, having been upset by the decision to book winger Marko Arnautovic for diving.

The Welshman admitted after the match he had stepped out of his technical area and "reacted in a forceful manner".

He was duly charged by the FA on Tuesday and, w hile Stoke say Hughes disagrees with the charge levelled against him, he will not contest it and now faces a potential touchline ban

The club added in their statement: "Stoke City does however have concerns in relation to a number of elements surrounding both the decision to dismiss Mark from the technical area and the events that followed that led to the subsequent charge being brought.

"Based on other Premier League matches played on that weekend, the club is concerned in particular that there has been a potentially inconsistent approach in the enforcement by match officials in instances of managers leaving their technical areas, together with an incorrect application of the Professional Game Match Officials Limited's own guidance note on the use of electronic equipment in the technical area in respect of a manager communicating with technical area staff from the directors' seating area after Mark was dismissed from the technical area.

"The club will be raising these issues with the Football Association and the Professional Game Match Officials Limited separately."