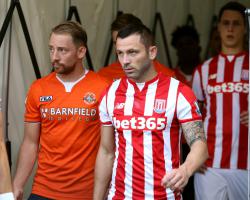 Stoke suffered a scare at this stage of the competition 12 months ago when they were taken to penalties by Luton, also of League Two, but managed to prevail in the shootout.

Stevenage have already claimed the scalp of Championship side Ipswich in the previous round and Bowen expects whatever Stoke team takes the field at Broadhall Way to show both the appropriate fight and quality to get the Potters into the next round.

We'll be all guns blazing for tomorrow night," said Bowen at his pre-match press conference on Monday afternoon.

"We approach it like we always do; we want to win cup matches

We need to put a shift in and hopefully show the superiority that we should have."

It looks like Stoke will head to Hertfordshire with an unchanged squad, although there are expected to be several changes to the starting line up with the likes of Marc Muniesa, Geoff Cameron, Charlie Adam, Jonathan Walters and Peter Crouch, all of whom were on the bench against Manchester City at the weekend, likely to be involved

Bowen said: "We're a little bit thin in terms of numbers so I imagine the full squad from Saturday will travel

(Xherdan) Shaqiri is still a little bit away

Glen Johnson trained but its only his first session so he won't travel whilst Jack Butland is still with the physios as we speak."