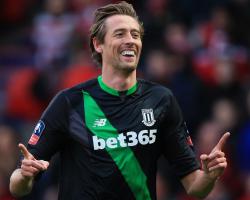 The 34-year-old scored his side's first-half opener then played a part in Jonathan Walters' thundering second after Nathan Tyson's equaliser threatened to serve up an upset for the League One side.

The former England striker has now started just five games for the Potters this season - all of them in the Cup - and admitted his frustration at falling out of the first team picture after a hamstring injury.

Crouch told his club's official website: "Ideally I'd like to stay at Stoke because I think we're a top 10 side and I'd like to be a part of that

Mark Hughes' desire to keep hold of Crouch will be obvious after an excellent performance which began with the striker producing a deft finish to put his side ahead after just 15 minutes.

Crouch responded sweetly to a right-wing cross from team-mate Joselu to send a neat shot past Thorsten Stuckmann and seemingly pave the way for a comfortable win for the favourites.

But Doncaster were level 10 minutes later after Tyson netted at the second attempt following a bustling run half the length of the field by the hosts' impressive midfielder Andy Williams.

Walters rocketed in what turned out to be the Stoke winner just before the hour mark but the home side came agonisingly close to a late equaliser with Andy Butler striking the post and both Tyson and Paul Keegan coming close in injury time.

Hughes cut a relieved figure after his side's close shave, admitting: "You always understand the home side are going to have a go and try to get back to level and it turned into a good Cup tie.

"I thought Doncaster played very well and caused us problems and it has taken two very good quality goals to take the tie away from them."

Rovers boss Darren Ferguson praised his side's commitment but immediately turned his attention back to his side's play-off push with a game against promotion favourites Gillingham looming next week.

Ferguson said: "It was important we performed to that level because we got a big crowd in and obviously we want to get them all back for our next home game.

"But I think the players showed the belief that they could win, especially after going behind twice, so it was a pleasing performance."