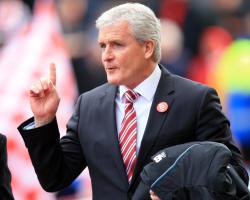 Crouch, 35, has made only 10 league appearances and has failed to score in any, but Hughes was impressed by his performance in the 1-1 draw with Sunderland last weekend.

"It didn't surprise me, I said after the game that he is a good player that I have probably disappointed more than most this season just because we had new players in the building and we needed to get them up to speed in the Premier League and sometimes that has restricted his opportunities in the Premier League.

"He has had decent appearances during the season but not enough starts in the Premier League he will feel, but he came in and did what he always does, he has done himself no harm (towards being picked against Palace)."

Stoke have had some impressive performances away from the Britannia Stadium this season with wins at Southampton, Everton and Swansea among them

Hughes is therefore hopeful the Potters can set a club record for the most away wins in a Premier League season with victory at Selhurst Park.

He said: "We have the chance against Palace to get three more points, we have six wins (on the road), we would like seven - we have never done that in the Premier League so we can still achieve things in the last few games."

Palace are through to the FA Cup final but are not safe from Premier League relegation so Hughes is unsure as to the strength of the team Stoke will face.

He said: "It is a difficult one for Crystal Palace, I am sure their focus will be looking ahead to the cup final but I think I am right in saying it is their last home game before the end of the season so that will always put an edge to your game.

"(The performance will be for) the supporters

Not all of them will be able to go to the cup final so they will want to be able to put in a good performance so we have to be ready for that.

"It depends how Alan (Pardew) plays this whether he takes the opportunity to protect players or whether he thinks it is a good time to get everybody up to speed.

"Players still have to play but his team selection will be interesting when I see it."