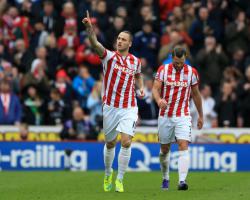 The Austrian forward joined the Premier League club in 2013 after three troubled years at Werder Bremen.

Speaking prior to Austria's international friendly against Albania, the 26-year-old said that it is thanks to the Potters he is enjoying himself once again, whereas he was only on the road to ruin in the Bundesliga.

"They have breathed new life into me."

While expressing his gratitude to Stoke for reviving his career, Arnautovic stopped short of committing his long-term future to the club.

"I've been here for three years and always performed well and I have told them to speak to my manager, who is my brother, and not with me (about a contract)

I want to focus on the season," he said.

"What happens then, nobody knows

Nobody knows if I will sign a new contract."

Arnautovic's current deal with Stoke has a year still to run on it.