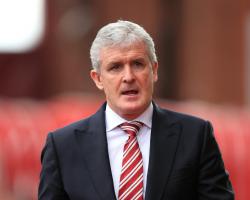 There is currently a seven-point gap between second-placed Spurs and leaders Leicester in the Barclays Premier League table, with each having five games remaining.

And whatever the Foxes' result at home against West Ham on Sunday, it would appear only a victory will do for Tottenham the following night if Mauricio Pochettino's men are to keep their title hopes alive.

Hughes feels that could lead to an approach to Monday's contest from the visitors that leaves them more vulnerable than usual and improves Stoke's chances of securing a positive result themselves.

"Tottenham will feel they have to win every game - I think they are running out of games now," Hughes said.

"They will have to be positive and try to win it, and I think that helps us.

That is when we have struggled to get the performances and results we have wanted at home.

"If Tottenham are not consistent in all aspects of the game, they may well leave space for us.

And they will feel this is a huge opportunity for them and have a real go.

"But we seem to do well against teams that are positive against us, so hopefully that is the case on Monday."

While confident Tottenham will be eager to attack, Hughes is less sure about how the pressure of the situation Spurs are in might manifest itself more generally on Monday in terms of their performance - but he hopes that could also be to Stoke's advantage.

The Welshman said: "You can see it both ways.

That is their challenge, and they deal with that on a weekly basis, a daily basis.

"So it is not something that should faze them as a club, team or individuals - but we know it can do.

"Pressure does affect players in different ways, both collectively and individually

So we may be able to use that to our benefit as well."

Stoke are hopeful of having midfielder Glenn Whelan (back) and forward Marko Arnautovic (knee) back available for Monday's game, but defender Marc Muniesa is a doubt.

Muniesa, who would be the most obvious replacement at left-back for the suspended Erik Pieters, will be assessed ahead of the match having picked up a knock in training.

Captain Ryan Shawcross is expected to be fit to keep his place after the defender made his return from a back problem in last weekend's 4-1 defeat at Liverpool, while it remains to be seen if goalkeeper Jakob Haugaard is retained or dropped, with Shay Given ready to step in.