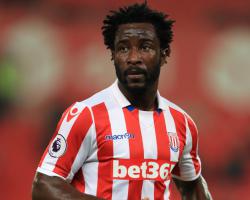 Reports have suggested Bony - yet to score for the Potters having made three appearances since joining on loan from Manchester City - is at the centre of unrest, with Hughes and his players questioning the striker's attitude and work rate.

But Hughes, speaking ahead of Saturday's Premier League home clash with West Brom, said: "Wilfried has come in and had a real positive impact on the group.

"We have been delighted with his character and what he has shown.

"In terms of what he's been able to produce on the pitch, he hasn't played too many games in the last couple of years, he is three games into his Stoke career and he is getting up to speed.

"To say we are questioning his attitude or what he is bringing to the party is totally wrong."

It has also been reported there have been integration problems at Stoke for midfielder Giannelli Imbula, the club's record signing who was dropped to the bench for last Sunday's 4-1 defeat at Crystal Palace.

And Hughes added: "Some of the guys are struggling a little bit for form.

"Giannelli is an undoubted talent, but on occasions, if your form is not quite where it needs to be, then you go out of the team

There are no underlying issues - it is football business.

"We have a good group, a great dressing room and one that is working hard to get positive results."

Rock-bottom Stoke's wretched league campaign to date has seen them collect only one point from five games, while they have lost their last four and conceded four goals on three occasions

"Unfortunately at the moment we are a little bit fair game for some who feel they can get easy headlines," Hughes said.

"It is all very predictable - player unrest, problems in the dressing room

They all come up in these situations

Stoke's misery continued on Wednesday as they lost 2-1 at home to Hull in the EFL Cup - despite being the better side virtually throughout.

The performance has given Hughes encouragement for the weekend, when he faces his predecessor Tony Pulis, for whom it will be his 1,000th game as a manager.

The poor start this season has brought questions over his position.

But Hughes pointed out on Friday that beating Albion would give Stoke one more point than they had after six games last term.

And he also emphasised his belief he remains the right man to be in charge.

"There is a little bit of noise around us because we haven't got our first league win, but if we win tomorrow we will have made a better start than we did last season, when we finished ninth," Hughes said.

"At the moment maybe people think there's a smell of blood in the air, and an opportunity to add pressure, but we add pressure ourselves.

"We're disappointed with the start, but I think you'll find very quickly that we'll start to get positive results and wins on the board.

"I think I have proved in my time here that I can take the club in the direction that we all want to be."