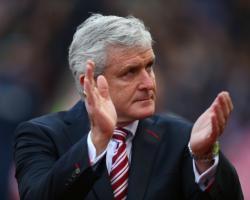 Beset by injuries and suspension last weekend, the Potters switched to a 3-4-3 system for the victory at Watford and Hughes persisted with the formation and personnel against the Clarets as first-half goals from Jonathan Walters and Marc Muniesa moved them ninth in the table.

With Joe Allen, free from suspension, and Glenn Whelan, back from injury, only on the bench, Hughes praised the collective strength of his squad.

"It's pleasing - given the run we're on there's a good feeling at this moment in time," he said.

"It was a difficult game for us

I just felt it was important to recognise everybody in the group.

"We're coming into a period where we're going to need everybody and I felt given the good performance last week, I couldn't find a reason to take anybody out of the team.

"Sometimes you have to trust your group, not disappoint them, and that was my thought process

They didn't let me down."

Walters hooked in a 20th-minute opener with a reactive volley from Mame Diouf's cross before Muniesa added a second with his first Premier League goal, bursting forward from defence to start an attack he finished by turning home Marko Arnautovic's cross.

"As a three, we encourage them if there's space in front, sometimes you can exploit that," Hughes said.

"Opposition players in front have to make a decision - do they stay with their man or come to the guy on the ball?

"We encourage Marc and Glen (Johnson) because they're good footballers

Technically they're good enough to carry the ball at pace.

"He's carried on his run, he's been picked out and it's a great strike

We're pleased with him

It's his first goal in the Premier League so we're absolutely delighted.

It was a fifth defeat in six for the Clarets on the road, who have taken just one point on their travels compared to 13 in east Lancashire, and t heir manager Sean Dyche urged his team to get more streetwise having been punished in the build-up to the second goal

After Stephen Ward played the ball out to allow Walters to receive treatment, Charlie Adam returned it to them only via a throw-in deep in their own half, with a Stoke goal arriving less than one minute later.

"We've got to learn more about the Premier League," Dyche admitted.

"I thought the gamesmanship was on show

I think they do it way better than we do - we're still a bit green.

"We're too honest at times for this division, more so than any other, I think

That's part of our growth - understanding the game through gamesmanship."