Mark Hughes Its only a matter of time before Stoke win 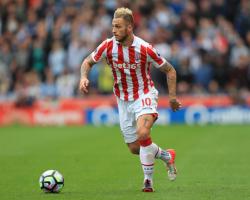 It is 40 years since the Potters last beat Manchester United away from home and they have not even managed a point on 13 consecutive visits.

Stoke's miserable start to the season has yielded only two points from six Premier League games but Hughes insists the signs are positive.

The Potters lost in stoppage time to Hull in the EFL Cup and then conceded another late goal, this time an equaliser, against West Brom last weekend when they looked poised to clinch a first win.

Hughes said: "We think it's only a matter of time before it comes because we're not playing badly

The last two games I've seen a confident team, a team that wants to address the situation and get the maximum points.

"It's not as if our confidence has been affected, we're fine in that regard, but clearly we want to get three points on the board as quickly as possible.

It's a big ask but, if we're going to get a first win on the board, why can't it be at Old Trafford?

"We know we're not too far away from getting back to the level we're capable of so there's no concern here.

"The last two games against Hull and West Brom, we didn't win because we made mistakes but the performances levels were good and I think that was shaped by the fact we weren't chasing the games.

"When you're on level terms or in winning positions, then you can shape the game and dictate to the opposition."

The last time Stoke took a point at Old Trafford was in 1980 back in the old First Division, with their record in the Premier League reading 25 goals conceded and only six scored.

"Records are there to be broken," said the Potters boss

"We've been able to tick a few boxes in my time here in terms of beating United here, beating Chelsea, getting a point at Chelsea last year, which had been a long time coming.

"We'll give it a good shot

We won't use our record as an excuse that we shouldn't be expected to win, that's not our attitude to what's ahead of us

We'll take the match on its own merits."

Hughes will check on the fitness of midfielder Joe Allen, who felt tightness in his hamstrings after the draw against West Brom and has not trained this week.

It is set to be a landmark weekend, meanwhile, for winger Marko Arnautovic, whose next appearance will be his 100th for Stoke.

Hughes said: " It was a big moment when we were able to get Marko to re-sign

"He's been with me since I've come to the club, he was one of my first signings, and for the majority of his time here he's been excellent

"He's growing, he's got more stature within the group

I think he enjoys that part of it, he's a senior player and wants to take more of a leadership role moving forward."