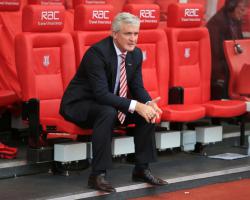 An injury doubt before kick-off with a hamstring problem, the ÃÂ£12million summer signing from Liverpool broke the deadlock with an eighth-minute header before lashing in a second on the stroke of half-time as the Potters cruised to a 2-0 victory, their first in the Premier League this season, over the winless Black Cats.

Allen took his tally to five in four games for club and country and has already equalled his best-ever Premier League haul for a season when he managed four with Swansea in 2011-12.

His purple patch has coincided with him operating in a more advanced role in midfield, something which Hughes only considered him for after working with him at training.

"We pushed him further forward just because sometimes when you get the opportunity to work with players day-in, day-out you see things that you didn't realise that they may have the capability of," Hughes said.

So if you can get him anticipating things in the box he's going to get on the end of things and that's what's happening at the moment.

"We're delighted with what he's producing

We're delighted he's with us."

It was also the first time Stoke had kept a clean sheet in 18 league matches, dating back to a March victory over Newcastle, and their defence was scarcely tested by a Sunderland team rooted to the foot of the division.

Although he is still waiting for his first three points at the Black Cats' helm, manager David Moyes took positives from the performance at the bet365 Stadium.

"I didn't think we played as bad as the 2-0 score suggested," the Scot said.

I'd like to say the referee (Mike Jones, who got in the way of a Didier Ndong pass in the build-up) was partly at fault for the first one but after seeing it again we had two opportunities (to clear).

"It was our own doing and then we conceded a goal from a set-piece where we lose the first header and aren't particularly well organised at the edge of the box and it goes through sets of legs and we don't kick it off the line.

"If we'd got in to half-time at 1-0 we'd been in the game enough to give ourselves a chance."