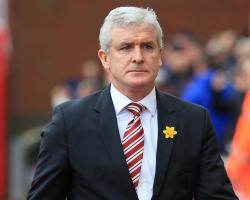 City remain on the coat tails of the teams chasing a Europa League slot following their 2-1 win at Watford on Saturday.

In a season where Leicester lead the Barclays Premier League, West Ham are challenging for the Champions League and Crystal Palace or Watford will make the FA Cup final, few people have mentioned Stoke's impressive campaign.

But Britannia boss Hughes insists that is just the way they like it.

"Nobody mentions us, but maybe we don't mind that," he said

"We are a little bit under the radar and we just get on with it.

"Sometimes people get ahead of themselves, people start saying nice things about you and you start believing it.

"Very few people actually...but we just get on with it

We like to be judged at the end of the season."

Goals from Jonathan Walters and Joselu put Stoke on their way to a sixth away win of the season, a club record in the Premier League.

Hughes has urged his side to stay in the shake-up for Europe up until the final day of the campaign.

"To be still talking about Europe at this stage of the season, with seven games to go, we've never done before so that's something we are going to try to attain if we can.

"It's not going to be easy, there are some good teams around us but the last game of the season we play West Ham and maybe that will be the game that decides whether we do it or not.

"Prior to that we have to make sure we get enough points to go into a game of significance that will determine whether we make it."

Troy Deeney headed in Ikechi Anya's cross for Watford's consolation but the hosts looked a shadow of the side which stunned Arsenal in the FA Cup six days earlier.

"We tried to put things right in the second half and we managed to get a goal, but it was too little, too late.

"Maybe we can just write it off as one of those days, but it's not like us."