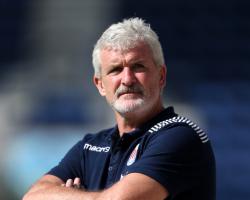 Hughes begins his fourth season in charge of the Potters with a trip to promoted Boro on Saturday.

A sell-out is expected at the Riverside Stadium as Boro return to the top flight after a seven-year absence but Hughes wants to spoil the party.

Hughes said: "It is not one you would have chosen, facing a newly-promoted team with all the energy and confidence of winning week-in, week-out from the previous year.

"That will still be their mindset, they'll be positive, but we have just got to make them aware, quickly, what the Premier League is all about.

"We are an accomplished Premier League team in our own right and we have the ability to do that.

"The crowd will be on a high and we will have to deal with that but we are looking forward to it.

"We are taking 3,000 fans ourselves so we are going to get great backing

There won't be a situation where we feel isolated out there."

Hughes has strengthened his midfield options with the ÃÂ£13million signing of Wales international Joe Allen from Liverpool over the summer.

The 26-year-old impressed at Euro 2016 and Hughes is convinced he has a bright future at the bet365 Stadium.

Hughes said: "He has proved on a big stage he can play at a really high level and we are going to benefit from that

He will grow and become a really important player for us, I am sure."

Hughes has guided Stoke to three successive ninth-placed finishes - their highest positions since the mid-1970s - but is confident of going better this time.

He said: "We showed last year we can get close to being better than ninth, so that is our intention this year.

"At one point it looked like we could reach Europe, we put ourselves in a really strong position, but in the six or seven games at the end we had key injuries that affected ability to win games.

"If we have a fair run at it and a little bit more luck in terms of avoiding long-term injuries to key personnel, then we'll have a good season again, I'm sure."