Mark Hughes admits improper conduct and is fined 8000 by FA 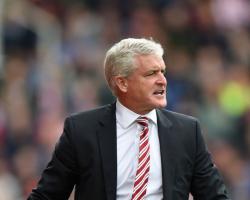 Hughes was sent to the stand during the first half of his side's 4-0 Premier League loss to Tottenham at the Britannia Stadium on September 10.

The Welshman had reacted angrily to two decisions he felt went against his side - a booking for Marko Arnautovic and what he thought was a foul on Jon Walters.

Hughes directed some of his anger at fourth official Jon Moss and accepted after the game he had overstepped the mark, saying he was disappointed by his reaction.

A statement from the FA read: "Mark Hughes has been fined ÃÂ£8,000 after he accepted the standard punishment following his FA misconduct charge.

"The Stoke City manager admitted that his behaviour in or around the 34th minute of the game against Tottenham Hotspur on September 10, 2016 amounted to improper conduct."