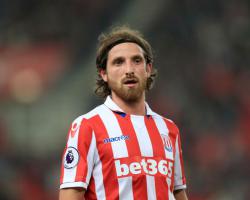 The midfielder scored his first goal for the Staffordshire outfit with a 73rd-minute strike against West Brom on Saturday - an effort that looked set to seal Stoke's maiden Premier League win of the season before Salomon Rondon's stoppage-time header ensured the game at the Bet365 Stadium finished 1-1.

Allen produced a very creditable display against the Baggies and has impressed in general since joining from Liverpool over the summer.

And Hughes said of the 26-year-old Wales international: "I think he left Liverpool because he wanted to play week in, week out, we are giving him that opportunity, and in every game he plays he has an influence.

"He has been the shining light for us this season - the one who has been really hitting the levels expected of him.

"Maybe some of the guys are still trying to get a level of form up to this point, but we have never had any issue with Joe in terms of his form.

"He has hit the ground running and been excellent since he walked through the door."

Allen played in quite an advanced position on Saturday, and Hughes added: "Joe has so many elements to his play, he has so much energy, and he can play in any number of positions.

"I think he enjoys being further advanced

He has good anticipation of things dropping around the box and that is what showed with his goal.

In certain games he'll play there and in others we'll need him to do other things."

Allen's close-range finish, which he produced when a Xherdan Shaqiri cross fell to him via a failed attempted clearance by Jonny Evans, was cancelled out by a goal that came from a corner needlessly conceded by the hosts.

Defender Bruno Martins Indi could have allowed his goalkeeper Lee Grant to catch the ball but instead put it behind.

The resulting corner, swung in by substitute Jonathan Leko, was met in decisive fashion by the head of Rondon to make it a satisfying return to the stadium for Albion and ex-Stoke boss Tony Pulis in his 1,000th game as a manager.

And 17-year-old forward Leko, who had come on in the 88th minute, told West Brom's official website: "I was really happy to come on and make the goal.

"I was told before I came on that I would be on corners and the instruction was to whip it towards the near post.

"I just tried my best to do that and thankfully it was a good delivery and Rondon managed to flick it into the net.

"It was a great feeling to run towards the fans, who were going crazy.

"It's what you dream of growing up as a youngster, scoring or making a goal in the last minute which means something."

The result saw West Brom move up to ninth in the table with eight points from six games, while Stoke, having ended their four-match losing streak in the league by collecting their second point of the campaign, rose off the bottom to 19th.