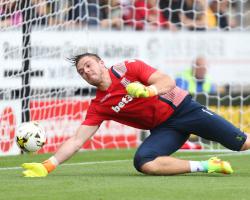 That was the timeframe suggested by the club's chairman Peter Coates last week, ahead of Potters and England goalkeeper Butland having the operation on Monday.

And Hughes said on Friday: "I saw Jack yesterday, for the first time since the operation.

"All reports are it went really well

That has all been cleared out.

"The likelihood is that it will be somewhere between six to 10 weeks when he comes back, and we are very hopeful the issue he has had is resolved now."