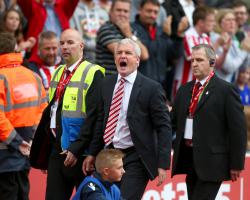 Hughes was sent to the stands by referee Anthony Taylor in the first half of the match, after showing his displeasure at a decision to book winger Marko Arnautovic for diving.

After cautioning Arnautovic, Taylor was called over to send Hughes to the stands for verbal abuse he appeared to direct at fourth official Jon Moss.

"It is alleged that his behaviour in or around the 34th minute of the fixture amounted to improper conduct," a statement on the FA's website read

After the match Hughes revealed his frustration at the incident, saying: "I came out of my technical area, I was upset and felt the assistant referee hadn't flagged for a clear foul and the referee then thought it was the right decision to book Marko when he was just trying to take evasive action

When you come out of your technical arena, it's not allowed, sometimes you forget that

"Mr Moss, bless him, decided that it warranted a sending off, which, by the letter of the law it did, so I have to hold my hands up."